Born in Uzbekistan in 1942 to Polish refugees, Serge Liberman came to Australia as a child with his parents in 1951.  He graduated in Medicine at the University of Melbourne and subsequently became a general practitioner for forty-five years.

His love of literature and writing began in adolescence.  Alongside his medical practice he wrote fiction, was literary editor of a Jewish newspaper, a member of editorial committees of several literary and historical journals and a contributor to publications and anthologies in Australia and overseas.  He produced six collections of short stories, receiving the Alan Marshall Award three times and the NSW Premier’s Literary Award.

Liberman compiled the Bibliography of Australasian Judaica, the updated and annotated edition of which was published in 2011.  In 2015 he was awarded the Medal of the Order of Australia (OAM) for his contribution to Australian literature as an author, historian and scholar.

His latest collection of selected short stories The Storyteller – Selected Stories was produced during his illness, with the assistance of literary friends, and was published posthumously in 2018.  The Storyteller is available from Hybrid Publishers, Australia. 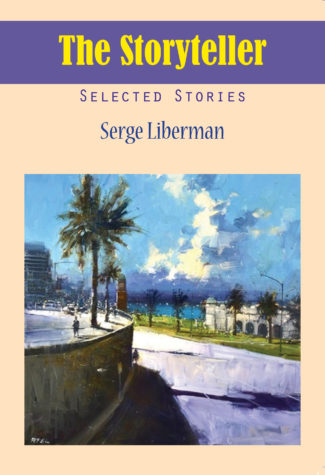 Serge Liberman’s extraordinary characters rise up off the page like apparitions. Whether in chastened submission to their fates, or in blazing defiance, or in search of meaning and significance, these figures are denizens of real, intimately observed social worlds.

A portrait-painter discovers a terrifying side-effect of his talent. A professor of medicine finds himself romantically involved with a dying patient. The lives of two young people are changed forever by a performance of the Mozart Requiem. A self-styled Messiah tries desperately to persuade a writer that he alone can avert a catastrophe about to engulf the city.

Liberman’s sinewy, intensely evocative and poignant style, unique in Australian letters, takes us deep into particular lives but always with reference to universal issues of fate, free will, and the moral landscapes of good and evil. His post-Holocaust humanism is passionately committed to the power of storytelling, and enters with special power art’s plea for love, compassion, inner freedom, and redemption.

This collection of some of Liberman’s finest and most characteristic stories draws upon all six of his published volumes of short fiction. It is offered not only as a summation and a tribute, but as a valuable contribution to the diverse field of Australian multicultural writing.

“A unique and pioneering voice in postwar Australian literature, Serge Liberman’s stories are informed by ancient longings, empathy for the traumatised outsider, a yearning for lost worlds, and compassion for those seeking to adjust to new worlds.” – Arnold Zable

Winner of the Alan Marshall award

Seventeen stories in which the author adopts various roles – immigrant child, doctor, deserted wife, tourist, jester – to tell of adjustment and maladjustment of migrants in a new land; of conflict between the generations; of individuals and communities doomed by time and by their own natures; of obsessed artists and rootless philosophers; and of impossible friendships and impossible loves.

A Universe of Clowns

Published in 1983 by Phoenix Publications, Brisbane. A professor of medicine emotionally entangled with a patient, a business magnate in pursuit of immortality, poet-survivors from Europe, an abandoned actress, outcast children, bewildered migrants, revisited friends — sixteen stories telling of people ever in search, in search for love, closeness and consolation, and for values and meaning in a world that sets limits upon all that a man may know, attain to, hope for and believe.

A professor of medicine emotionally entangled with a patient, a business magnate in pursuit of immortality, poet-survivors from Europe, an abandoned actress, outcast children, bewildered migrants, revisited friends — sixteen stories telling of people ever in search, in search for love, closeness and consolation, and for values and meaning in a world that sets limits upon all that a man may know, attain to, hope for and believe.

The Life That I Have Led

Philosophers, visionaries and poets, and survivors, doctors, children, adolescents and mimes among a host of others discover God, love, truth, terror, identity and self as far afield as New York, Venice and Curacao, no less than at home, at St Kilda Beach, at a New Year’s party, or under a circus-top, in a surgery or along the common thoroughfare – sixteen more strong, sensitive, penetrating stories by a writer recognised as a disciplined master of his craft.

The Battered and the Redeemed

“Through these works, Serge Liberman strengthens his claim upon his own highly individual niche in Australian writing.”

The Mozart Requiem marks a turning-point in the lives of two young people; an adolescent aspiring to be a writer stands at the threshold of his literary mission; a doctor discovers personal implications in another man’s death; three musicians play for their very lives; a school reunion turns surreal; the apostle Paul sees not one vision but two; a visitor to New York is drawn into the search by its myriad inhabitants for personal salvation.

These stories and others are peopled by disciples and martyrs, heretics and pilgrim souls; they tell of janitors and students, revolutionaries and common folk; and evoke folklorish princes and biblical figures, would-be converts and human saints.

Voices from the Corner

VOICES FROM THE CORNER First published in 1999 by Fine-Lit.

In addition, emerging lifelike from its pages are an engaged couple promising to meet again at war’s end and making good the promise, although fifty years late; another couple wins a handsome lottery prize and an unforseen bonus besides; a writer returns to the adolescent origins of his writing life, a lawyer possessed by the soul of Paul Gauguin is driven on a mission; first loves are recalled; a dysfunctional family are the forebears of world-wide faiths; and in a courageous and honest piece, Liberman recounts his fiery relationship with his father. In ways signalling new directions, Liberman’s variously quirky, wry, earnest, harrowing, questioning and iconoclastic narratives continue to carve a very individual niche in Australian writing.

Published in 2008 by Hybrid Publishers.

Told through the eyes of a doctor, these narratives explore the question of what it means to confront life in all its manifestations, to suffer and be human. Raphael Bloom meets a fascinating and complex range of patients who come to him, not only to be healed physically but to grapple with existential problems of meaning, disappointment and hope. Through these encounters, he explores issues of faith and individual purpose in an alienating hard-edged world, of anger and forgiveness, of despair and creative fortitude.

Set in Melbourne, these compassionate and compelling stories achieve universal resonance, while the characters will live on in your mind long after you turn the last page.

Voices from the Corner: A Response by Veronica Brady

A Universe Of Clowns – review

Melbourne as a hell-on-earth

Moral tales from the private world of a tormented race

The Elusive Land of Milk and Honey

The Stort Stories of Serge Liberman

To Transcend Anonymity and Oblivion

Materials towards a history of Jewish Carlton

Australian Jewish Literature through the Eyes of a Bibliographer

The Other Wife by Manfred Jurgensen – a review

Shadow of Doubt by Richard Freadman

Questions of a Summer Night – fiction

The Golem of Golah – fiction

Is There a Jewish Literature?

“Under the strange, somehow transparent light of these southern skies”- Jewish Writers in Australia

Author finds his Africa – review of Where I Stand

_`Tsibeles, Pretzels, Blondinnies, and Red-Heads’- The Trials and Terrors of Assimilation in Serge Liberman’s Short Fiction_